A mixture of aliphatic, open-chain or alicyclic C7 to C12 hydrocarbons, white spirit is insoluble in water and is used as an extraction solvent, as a cleaning solvent, as a degreasing solvent and as a solvent in aerosols, paints, wood preservatives, lacquers, varnishes, and asphalt products. In western Europe about 60% of the total white spirit consumption is used in paints, lacquers and varnishes.[1] White spirit is the most widely used solvent in the paint industry. In households, white spirit is commonly used to clean paint brushes after use, to clean auto parts and tools, as a starter fluid for charcoal grills, to remove adhesive residue from non-porous surfaces, and many other common tasks.

The word “mineral” in “mineral spirits” or “mineral turpentine” is meant to distinguish it from distilled spirits (distilled directly from fermented grains and fruit) or from true turpentine (distilled tree resin).

Types and grades
Three different types and three different grades of white spirit exist. The type refers to whether the solvent has been subjected to hydrodesulfurization (removal of sulfur) alone (type 1), solvent extraction (type 2) or hydrogenation (type 3).[2]

Each type comprises three grades: low flash grade, regular grade, and high flash grade (flash refers to flash point). The grade is determined by the crude oil used as the starting material and the conditions of distillation.[2]

In addition there is type 0, which is defined as distillation fraction with no further treatment, consisting predominantly of saturated C9 to C12 hydrocarbons with a boiling range of 140–200 °C (284–392 °F).[3]

Stoddard solvent is a specific mixture of hydrocarbons, typically over 65% C10 or higher hydrocarbons,[4] developed in 1924 by Atlanta dry cleaner W. J. Stoddard and Lloyd E. Jackson of the Mellon Institute of Industrial Research as a less flammable petroleum-based dry cleaning solvent than the petroleum solvents then in use.[5][6] Dry cleaners began using the result of their work in 1928 and it soon became the predominant dry cleaning solvent in the United States, until the late 1950s.[7]

Turpentine substitute is generally not made to a standard and can have a wider range of components than products marketed as white spirit, which is made to a standard (in the UK, British Standard BS 245, in Germany, DIN 51632). Turpentine substitute can be used for general cleaning but is not recommended for paint thinning as it may adversely affect drying times due to the less volatile components; while it may be used for brush cleaning its heavier components may leave an oily residue.

In Australia, white spirit is normally sold under the generic name of Shellite (a trademark of Shell Australia), and is composed of C6 to C10 straight alkanes, classing it as light pure naphtha. It is used for fuel and cleaning. 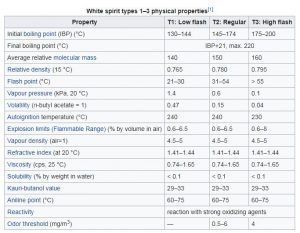 Use
White Spirit is a petroleum distillate used as a paint thinner and mild solvent. In industry, mineral spirits are used for cleaning and degreasing machine tools and parts, and in conjunction with cutting oil as a thread cutting and reaming lubricant.

Mineral spirits are an inexpensive petroleum-based replacement for the vegetable-based turpentine. It is commonly used as a paint thinner for oil-based paint and cleaning brushes, and as an organic solvent in other applications. Mineral turpentine is chemically very different from turpentine, which mainly consists of pinene, and it has inferior solvent properties.[8][not in citation given] Artists use mineral spirits as an alternative to turpentine since it is less flammable and less toxic. Because of interactions with pigments in oil paints, artists require a higher grade of mineral spirits than many industrial users, including the complete absence of residual sulfur.

Mineral spirits were formerly an active ingredient in the laundry soap Fels Naptha, used to dissolve oils and grease in laundry stains, and as a popular remedy for eliminating the contagious oil urushiol in poison ivy. It was removed as a potential health risk.

Mineral spirits have a characteristic unpleasant kerosene-like odor. Chemical manufacturers have developed a low odor version of mineral turpentine which contains less of the highly volatile shorter hydrocarbons.[9] Odorless mineral spirits are mineral spirits that have been further refined to remove the more toxic aromatic compounds, and are recommended for applications such as oil painting, where humans have close contact with the solvent.

In screen printing (also referred to as silk-screening), mineral spirits are often used to clean and unclog screens after printing with oil-based textile and plastisol inks. They are also used to thin inks used in making monoprints.

Mineral spirits are often used inside liquid-filled compasses and gauges.[10]

White spirits are a major ingredient in some popular automotive fuel/oil additives, such as Marvel Mystery Oil, as they are capable of dissolving varnish and sludge buildup.[11]

Toxicity
White spirit is mainly classed as an irritant. It has a fairly low acute toxicity by inhalation of the vapour, dermal (touching the skin) and oral routes (ingestion). However, acute exposure can lead to central nervous system depression resulting in lack of coordination and slowed reactions. Exposure to very high concentrations in enclosed spaces can lead to general narcotic effects (drowsiness, dizziness, nausea etc…) and can eventually lead to unconsciousness. Oral ingestion presents a high aspiration hazard. Prolonged or repeated skin exposure over a long period of time can result in severe irritant dermatitis, also called contact dermatitis.[2] Exposure to white spirit in direct contact with the skin for several hours can cause severe chemical burns.[12]

Exposure to an average white spirit concentration of 240 mg/m3 (40 ppm) for more than 13 years (of continuous exposure time) can lead to chronic central nervous system effects. Similar long-term studies have been made in which some of the observed effects included memory impairment, poor concentration, increased irritability etc. White spirit is implicated in the development of chronic toxic encephalopathy (CTE) among house painters. In severe cases CTE may lead to disability and personality changes.[2][3] These effects in painters were first studied in 1970s in the Nordic countries.[3]

Owing to the volatility and low bioavailability of its constituents, white spirit, although it is moderately toxic to aquatic organisms, is unlikely to present significant hazards to the environment. It should not however, be purposely poured down the sink or freshwater drain.[2]

People can be exposed to Stoddard solvent in the workplace by breathing it in, swallowing it, skin contact, and eye contact. The Occupational Safety and Health Administration (OSHA) has set the legal limit (Permissible exposure limit) for Stoddard solvent exposure in the workplace as 500 ppm (2900 mg/m3) over an 8-hour workday. The National Institute for Occupational Safety and Health (NIOSH) has set a Recommended exposure limit (REL) of 350 mg/m3 over an 8-hour workday and 1800 mg/m3 over 15 minutes. At levels of 20,000 mg/m3, Stoddard solvent is immediately dangerous to life and health.